Kasia Breska – a graduate of Environmental Biology at the University of Toruń and the Academy of Fine Arts in Bradford, currently living and creating in Leeds. She is a member of the artistic group East Street Arts. Her interests encompass artistic activities in public space perceived as a place of relations between architecture and man. In her projects, she is inspired by the geometry and the specific language of simple graphic characters. She always considers the specificity of the place in terms of architecture as well as history and culture told by its inhabitants. She pays attention to the existing elements, takes numerous photographs, and looks at the details. She broadens the knowledge about the place by studying maps or spatial plans and, most importantly, by staying for a certain time in a given place, which – as she claims – helps her absorb its properties.

That was the case with the festival project – Kasia Breska came to Łódź at the end of June to get to know the area and feel its spirit, so that the emerging mural best reflected the multiculturalism and dialogue space emphasized by the Łódź of Four Cultures Festival translated into a creative language.

At the invitation of the Łódź of Four Cultures Festival, the author’s mural “Łódź Totems” was created on the wall of the building at 20 Jaracza Street. 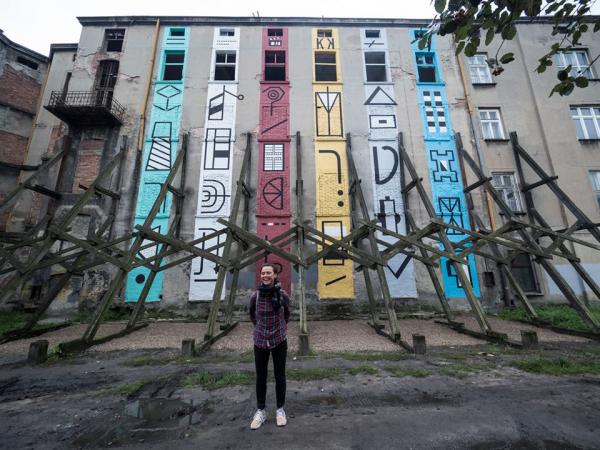