Guy Denning – born in 1965 in Great Britain, a contemporary self-taught artist based in France. He is the founder of the Neomodern group and part of the urban art scene in Bristol.

Despite the fact that he was interested in art and painted since childhood, he applied for acceptance to art school several times with no success. His earlier works – mainly abstract – point to an inspiration with Franz Kline's works, and are characterized by strong, expressive brush strokes. In time, his style began moving towards increased figurativeness. In his most recent pieces, we see more and more human figures which show strong emotions, sometimes even with a political message.

The no longer existing mural in Łódź by Guy Denning and Nemi UHU was created in 2016 at 4 Wrześnieńska Street. 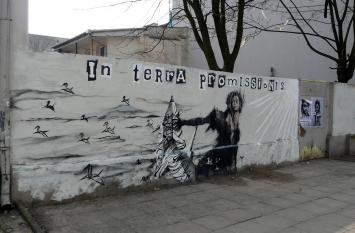