Bezt  Mateusz Gapski – a graduate of Graphics and Painting at the Władysław Strzemiński Fine Arts Academy of Łódź. Along with Przemysław Blejzyk (alias “Sainer”), he makes up the ETAM CREW. Unlike Sainer, who mostly paints human figures, Bezt focuses on animals.

Bezt himself is the author of the no longer existent piece “The Race” created in 2012 on a moving wall by the Academy of Fine Arts. It came into being during a project in which the Urban Forms supported graduation works of the fifth-year students realized in the form of murals. 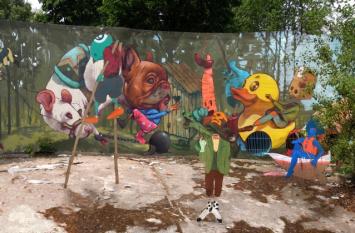