A self-taught illustrator from Toruń. Soon after finishing his education, he worked as a freelancer, creating drawings, illustrations, storyboards, figure designs, comic books, clothing designs, and animations, as well as conducting workshops and classes. He polished his craft in the field of large format painting through his contact with the local graffiti scene. His first murals were done with the now non-existent group WYJAZD. His pieces – regardless of technique and format – express a strong fascination with comic books, a narrative, telling a story. He is connected to the independent culture of Toruń, he animates the local street art scene and gives the city its mural aesthetics. He is the author of tens of large-format pieces in Toruń. Currently, he is working more and more in other cities in Poland and other countries. He also experiments with combinations of large-format painting and reportage, sound and animation (mapping), and works on the narrative development of large-format painting.

In Łódź, during the “Energy of the City 2016” Festival, he completed the project “The Second Life of a Factory”, which fits in with the multimedia trend of his creative work. Through his collaboration with Bartosz Siorek – the author of the animation, and Seven Nash, who composed the music, Andrzej Poprostu created a 3D mapping show which brought the previously created mural to life. The artists were inspired by the industrial roots of the city, and on an aesthetic level, by the old design and prints on the patterned fabrics which were produced in the factories of Łódź. The mural was “tagged” with QR-codes which contained sound files and appropriate descriptions of the piece. It can be seen on the wall at 77 Pomorska Street. 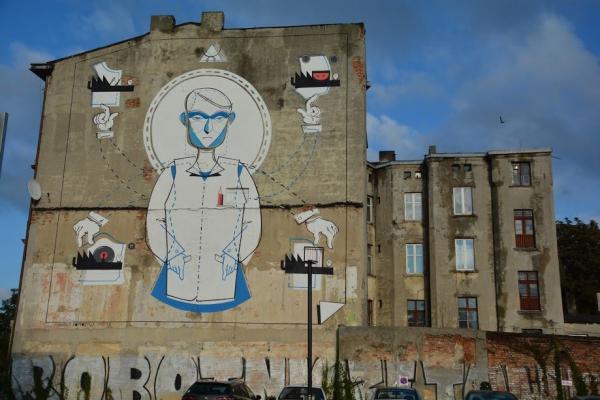 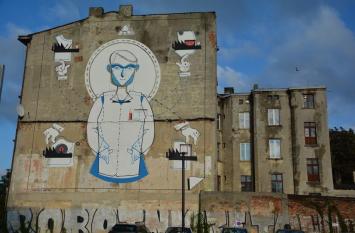